Our good friend Doug from Seattle recently did a brain dump about a road trip he took down the Florida Keys. In his own words, here are his ideas.

A quick geography lesson for you.

1) In terms of travel time from Miami, my rule-of-thumb is this. In one hour of driving from Miami, you get to Key Largo (very commercially developed; most would consider it the “start of the keys.”)
2) Another hour further (you’re now two hours or more from Miami), you get to Marathon (nothing super-noteworthy there, but it is a notorious speed trap; watch the signs carefully).
3) Another hour further, you get to Key West (which has history (Hemingway house, Audubon Museum, maritime museum, Truman winter White House), charming sections — think Charleston or New Orleans old houses), some very good restaurants (my favorite is “Seven Fish”), some nice resort options, and unfortunately quite a bit of schlock (which with considerable planning can be largely avoided).

Key Largo
See earlier notes (and know that the world-famous John Pennekamp Park is here), plus they have the boat used in African Queen (just sitting at a dock), which has camp value. Lots of boat excursions and scuba excursions, but a bit over-commercialized. Might be worth a stop for an excursion, but I wouldn’t base myself here. If Allison is focused purely on SCUBA, then there are lots of options (including the famous John Pennekamp Underwater Park) at Key Largo, which offers lots of scuba / snorkel / boating options

Key Largo – Marathon
I’m a big fan of the town of Islamorada, which is thirty minutes or so beyond Key Largo. There are a cluster of fairly tasteful restaurants and hotels in this area, and it attracts a more upscale clientele than Key Largo (IMHO). If you want the feel of the Keys without going all the way to Key West, this is a pretty good bet. Hotel options include the venerable Cheeca Lodge, the newer and supposedly fabulous Moorings Village and Spa, and several others. Good restaurant options, too, including Morada Bay and sister restaurant Pierre’s. The resorts could point you to on-site or nearby options for SCUBA and snorkeling. Can you tell I like Islamorada?

Marathon
An endless string of strip malls, a small airport (American Eagle once served it, but gave up after a year or two), and, oh yeah — lots of speed traps. Very few redeeming qualities. Can you tell I don’t like Marathon? (I was a victim of one of those speed traps and got an expensive ticket!)

Marathon – Key West
This is a very cool stretch, and it’s what you think of having seen the movies, which often feature scenes of the famous Seven Mile Bridge. It’s just south of Marathon, where hopefully you’ll have transited quickly enough to not be appalled by Marathon’s ugliness, but slowly enough to have not gotten a speeding ticket in one of their bogus and punitive speed traps.
The Seven Mile Bridge is the reward for getting past Marathon. Further down the Overseas Highway, you’ll come to Bahia Honda State Park, which features one of the limited number of good beaches in the keys. It’s a very pretty spot for a few hours on the beach, and they also have lots of snorkeling options (maybe SCUBA, too). And at this point, you’re getting very close to Key West. Someone down here, there’s a very exclusive and expensive hotel on an offshore island. We have not been, but it looks kind of cool, so check out Little Palm Island.

Key West
Key West as a fascinating mix of people and things. There’s great history and architecture (sadly, only a few beaches), but you can get on myriad boat excursions that take you to stunning reefs. Focus on “Old Key West”, which I’d consider Flemings Street and Simonton Street as its epicenter. Limit your time on Duval Street (very commercial, but worth at least one look). Hotel and restaurant options abound (the options are so numerous that I’d send you to Google or TripAdvisor for the latest and greatest). Stay someplace with a good pool, rent a bike, find a good snorkel / boat trip, find a bar (they’re everywhere!), and just enjoy. The one thing that I recommend to more adventurous friends is the day trip to Fort Jefferson National Park, a remote spot 70 miles or so by boat from Key West. I’m a huge fan of Fort Jefferson; there are lovely spots for snorkeling and it’s a very impressive fort steeped in history. 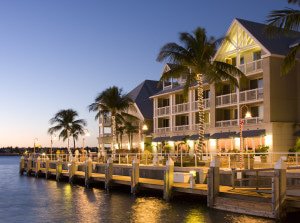 You can also fly right into Key West, but there are tradeoffs involved (flights are often expensive, you miss a few things worth seeing along the way. On the flip side, the traffic can be horrendous, especially on a weekend, so check it out as an option. You can always drive north from Key West to Bahia Honda Park and to see the Seven Mile Bridge.

So that’s Doug’s road-trip primer in a nutshell. If you’d like more information, or would like to chat with Doug, let us know!