With the growth of European river cruising, and its appeal to North American travelers, I’ve often wondered why there are not more river cruising vessels and destinations here in the USA. Last week I had the opportunity to spend a week on the Un-Cruise Adventures SS Legacy sailing round-trip out of Portland Oregon, eastbound along the Columbia and Snake Rivers, all the way to the Idaho border. This five-star trip in an unparalleled experience here in the States and I highly recommend the 7-day cruise for both for passionate river and ocean cruisers. 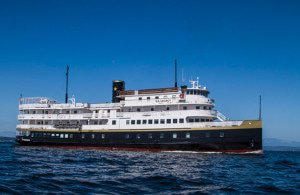 The 88-passenger SS Legacy was built approximately 30 years ago as the Spirit of 98, operating as a coastal steamer in New England, calling on the smaller, hard-to-reach ports of the east coast. The design of the ship is based on navel architecture from the late 1800s, but is now equipped with today’s modern conveniences that passengers expect. The vessel was most recently owned by now-defunct Cruise West, and was brought into the Un-Cruise Adventures fleet in 2013, after a complete refurbishment.

Un-Cruise Adventures originally deployed the ship in Alaska, but has decided to permanently base in Portland for the April – November 2015 season, offering the Legacy of Discovery and Ameritage – Four Rivers of Wine and History themed cruises.

The appeal of the Un-Cruise Adventures river cruise on the SS Legacy is that everything is included in the fare – meals, accommodations, drinks, activities, a free massage, and airport or hotel transfers. The 44 cabins on board are set up into either a twin bed or queen configuration, sold in 7 bookings categories. The accommodations are extremely comfortable with en-suite baths and televisions (used for watching DVDs from the ship’s library). There’s twice-daily maid service from the ship’s stewards, who also are the dining room servers.  Another aspect of the ship what very much appealed to me was the open bridge policy. I spent quite a bit of time in the wheelhouse with Captain Dano Quinn and his team, which was mesmerizing especially during sunrise and sunset. 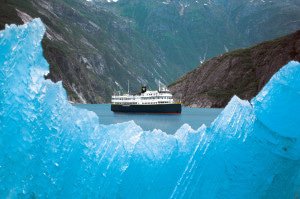 For The Savvy Navigator, however, the highlight of the cruise was the food and wine quality. Three meals a day are served, along with cocktail hour, daily at 5:30pm, and early riser breakfast from 6:00-8:00am (the early riser coffee cake was the best I’ve ever consumed). The variety and quality of the food was excellent, and paired nicely with local beers and wines from the Pacific Northwest.  In addition to the open-seating dining room, there’s also a large, comfortable lounge on an upper deck above the bow, which is comfortable and always stocked with snacks, libations and coffees. (A special shout-out goes to the nocturnal pastry chef, whose bread, rolls, pastries, desserts, and other baked goods turned this non-dessert eater into a ravenous sugar glutton.)

The other aspect of the cruise, and I’ll dive into the itinerary and destination details in another article, is the presence of the historical interpretation team, who function as the guides for the cruise. Led by historian Ryan Downs, the team did an excellent job bringing history to life, in an authentic and entertaining way. I had my doubts and expected this aspect to be totally cheesy. But I was pleasantly surprised!

The cruise line is targeting an older passenger demographic, which was clearly represented on board. There were several families traveling with elderly parents, and the youngest passenger was a young woman in her 20s, traveling with her beloved Grannie (who was checking off her own bucket list item to visit the trail of Lewis and Clark). This is not a cruise for families with children, and probably my only complaint is that there were not more active touring options such as hikes. A hike along a portion of the Oregon Trail would have been really interesting. The other issue I find odd is the name of the company,Un-Cruise Adventures. While they are trying to market to a group of travelers not wishing to have the mega-ship experience, there are a group of passionate cruisers I found who love smaller-ship and river cruising. And this demographic was clearly represented on board last week. I’ve always been a big ship sort of cruiser, and I’m now a small ship convert.

The bottom line is that I loved this cruise – It was comfortable, interesting, I gained a few pounds, and was exposed to a completely new part of the world. And, best of all, I didn’t have to fly to Europe for a river cruise adventure!

When you’re ready to book your river cruise, please let us know and we’ll show you the way!