Just before my trip to Mallorca in Spain a few months ago, I was fortunate enough to return to one of my favorite places on the planet…Argentina! I fell in love years ago working on the Eastern Airlines → American Airlines Latin America transition team with Kathy (yeah, we’re that old)! But I digress…

The best things about this destination include:

– North – South, intra-hemisphere flying is gentler on the body, just sayin!
– They do red meat REALLY well.
– Red wine (and specially Malbec) is plentiful
– The Portenos of Buenos Aires are seriously beautiful human beings
– They do late dining REALLY well (important to Kathy)
– It has a great New World vibe, but with European flair!

Folks have been asking about what we love about Argentina and here’s our Top 5 List of things that have endeared us to Argentina: 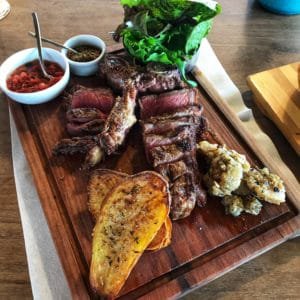 So, if you enjoy eating mouth wateringly delicious red meat, drinking elegant red wine surrounded by beautiful people, late at night, then you too will fall in love with Argentina!

Our journey begins with an urban experience in Buenos Aires. We stayed at the fabulous Four Seasons Hotel Buenos Aires, dined on as much Argentine Parrilla (BBQ) and Empanadas as we possibly could and did not miss our fav (and arguably the best) steakhouse in Buenos Aires, Cabana Las Lilias!

Just outside Buenos Aires at Estancia La Bamba de Areco is the original Horse Whisperer, Martin Tatta. He is a self taught horse trainer whose bond with his horses is so close that he can talk his horse into rolling over on his back so that he can sit on his stomach, or do handstands on his neck or cuddle up and give kisses! It is truly something to see!

#2 Mendoza and the Wine Country

Mendoza is one of the most spectacular places I have ever been and the always beautiful, warm and welcoming Cavas Wine Lodge is one of my favorite places to stay. You are in the middle of a vineyard with the Andes in the backdrop. Travel & Leisure just ranked it #1 Best Hotel in South America and #8 Best Hotel in the World and deservedly so! The owners, Cecilia and Martin are the most wonderful hosts imaginable and they can arrange custom wine tours in the best wineries and vineyards that only insiders know about. Whether you prefer a Malbec or a Merlot, a wine tour is absolutely a must!

And while we didn’t squeeze it in to this trip, we can’t help but recall our four night adventure on the expedition ship, the Australis! The only adventure ship that routinely does Argentina and Patagonia, great for amazing cocktails, hike on glaciers, penguin colonies, birds of prey in their natural habitat and breathtaking scenery. The majestic glaciers rival anything one could see in Norway. They also have the best naturalist guides anywhere!

Salta – Region in the northwest part of argentina, truly the real Argentina known for its lush, open grasslands, the Pampas and the Gaucho. It is also home to an emerging wine region pampas new emerging wine region, which now produces lovely Merlots, Malbecs, Cabernet Sauvignons and Chardonnays. While there we love the ever stylish boutique hotel and hidden gem, Legado Mitico. Each of the eleven guest rooms celebrate legendary Argentinians ranging from famous a Conquistador to Eva Peron. The architect owners also have their flagship hotel in Buenos Aires which I love! 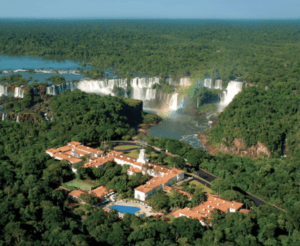 Situated on the Brazilian border of Argentina, the falls are natural wonder of the world. For those of you who have visited Vic Falls in South Africa this is the Argentine equivalent. It is the largest waterfall system in the world! Great for one or two nights — See the falls, take a stroll through rainforest, and sip Caipirinha Cocktails (Brazil’s national cocktail) while gazing at these breathtakingly beautiful falls. Belmond das Cataratas Hotel combines complete luxury and a magnificent setting! Brazilian falls property at the falls. In the national park is a property used to be a sheraton someone else bought and made beautiful

It’s Super Easy to Get To!

Aside from all of the incredible reasons described above, one of the mostly compelling reasons is that getting to Argentina is SO easy on the body because you are flying north to south! It is the same distance as eastern Europe but oh so much more pleasant! Plus, all major airlines fly from all US hubs – doesn’t get easier than that!!